Recorder – Excellent recordings can be made from unrealBook mobile on your music stand! Use this to record your band, rehearsals, or your lessons. 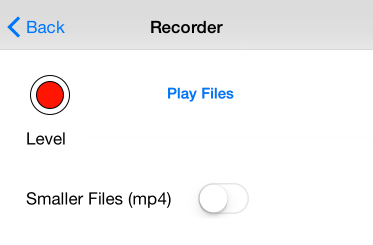 Press the Record button to start a recording. Press it again to stop. Press the Play Files button to see all the recordings you have made and to play and rename them.

Smaller files will create .mp4 files but with reduced fidelity. These smaller files are easier to email.

Note: Recordings are in .WAV format. Most applications on the Macintosh including Quicktime can play these files. To backup these files, copy the .WAV files out of the unrealBook documents folder in iTunes to your computer . 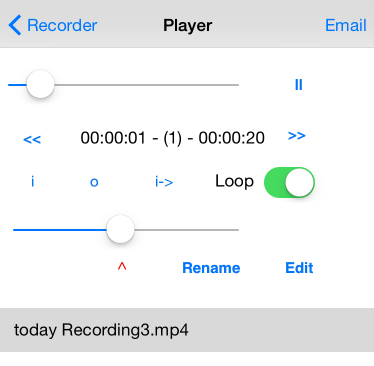 To play a file, simply press the filename. To stop the playback, press the filename again. To rename a file, make sure it is selected and then press Rename. To delete a file, press the Edit button, then press the red minus button on the left of the filename. To jump to the middle of a file while it is playing, use the scroll bar. You can email recorded files as long as they are not larger than your email can handle.
In addition to simple playback, you can use the << and >> buttons to jump backwards or forwards. Press the i button to set an in point. Press the i-> button to continuously start from the in point. Press the o button to set an out point when Loop is ON. This will loop between in the in and out points. To set an out point at a spot, press the pause button and then drag the slider to the out point spot and press the o button. When the file is playing you can press the i or o buttons at any time to set the in and out points. The slider below the i, o and i-> buttons set the playback speed. Press the red ^ button to go back to normal playback speed.


If you slide your finger from the left edge to the right you can access the utilities window. This window contains a metronome, recorder and music player.

Slide from the left edge of the screen to the right to access the utilties window. 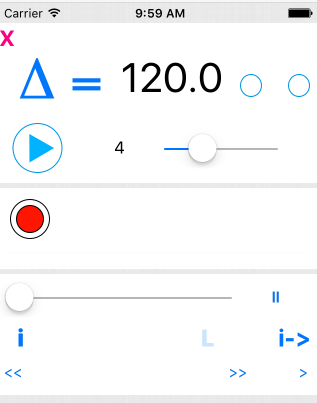 The utilities window is divided into 3 areas. Metronome, recorder and music player. 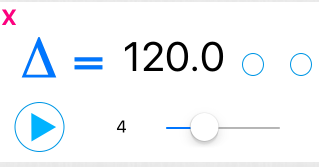 Tap the triangle to set the tempo or press and type directly in the tempo field. Press the play button to start the metronome. Set the number of beats with the slider. Press the first beat dot to toggle accents.

Press the record button to start recording. Press it again to stop recording. 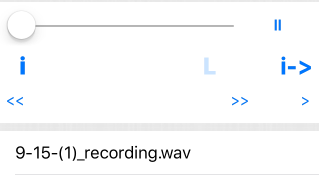